The Eastern symbol of Yin Yang, with its equal swirls of black and white, has become ubiquitous on clothing brands, computer games and in popular culture generally. This idea of a balance between good and evil, of an eternal struggle between the two, is played out in comics and TV shows, and is very appealing. We can identify that tug of war in the world around us and we feel the struggle within ourselves.

The concept of equal but opposing forces in an epic duel has even crept into Christian thinking. However, Biblical Christianity teaches a far different and more encouraging power balance than that good causes and is dependent upon evil, just holding its own in the struggle.

Contrary to popular thinking, the opposite of Satan, or the devil, in the Bible is not God, or His Son Jesus. Satan is only a fallen archangel and his opposing equivalent would be another archangel, like Michael or Gabriel. Satan is a created creature, in no way nearly as powerful, all-knowing or magnificent as God. Comparing Satan to God is like comparing a rabid, barking dog – scary and dangerous no doubt – with the largest dinosaur that ever lived, who could simply step on the dog or destroy it with one swipe.

When Satan, then called Lucifer, rose up in pride and rebellion against God (Isaiah 14:12-15), he was thrown out of heaven with one third of the angels (Revelation 12:4). That means that for every one demon (fallen angel), there are two holy angels: therefore, there is twice as much force for good in the world as for evil. That’s encouraging! 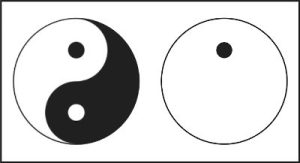 According to the Christian worldview then, the yin yang sign should really be a big white circle with one little black dot. Sometimes we may feel overwhelmed by the bad things happening in the world but we should remember the incredible, mighty, vast forces arraigned on the side of all that is righteousness and holy and good.

In the Bible, in 2 Kings chapter 6, there is the story of Elisha and his servant facing the armies of Syria. His servant is afraid and Elisha prays that his eyes might be opened to see the horses and chariots of God on their side. The servant then sees a huge fiery army surrounding them, much more than those that stand against them. God is not impotent or uninterested, not reactionary or resigned. He is involved in our world, powerful to intervene and His current patience with evil should not be interpreted as tolerance.

God promises He will judge evil and destroy Satan, all his minions and those who have fallen for his schemes. We would do well to align ourselves with the (vastly more numerous and powerful) forces of good while we still have a choice.

Today is the day to choose. As Joshua exhorted the Israelites “choose for yourselves this day whom you will serve, whether the gods which your fathers served that were on the other side of the River, or the gods of the Amorites, in whose land you dwell. But as for me and my house, we will serve the Lord.” (Joshua 24:15)