HAVE YOU HEARD people say ‘I like the Jesus of the New Testament (NT) but I don’t like the angry God of the Old Testament (OT)?’

Sometimes it seems to me though that we think they are two different types of gods: that the OT God is a stern, strict Victorian father who takes the strap to his children if they do wrong, whereas we imagine Jesus as a modern, fun parent who gives us lots of hugs and positive reinforcement.

But are either of these really the picture the Bible portrays?

In fact, the Bible often does portray God as a Father. 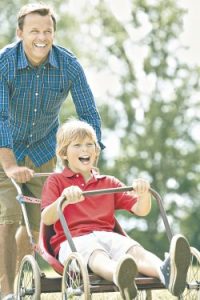 But even the OT shows us a picture of God being a very compassionate father to the Israelites – repeatedly overlooking their disobedience to His laws, giving them another chance to do as He has directed, giving them plenty of warning before He disciplines them, not enjoying correcting them and relenting when they turn back to Him.

Bearing in mind that God is a being of infinite power who, the Bible says is so big He holds the world in His hand, He could have wiped them off the face of the earth at any time, quite justly, for their rebellion against Him.

However, His anger at their wrongdoing and betrayal of Him is short-lived compared to His infinite loving kindness towards them.

And in the NT we find Jesus is not an indulgent dad, but He shows the Father to us as a God who has high standards, who disciplines the children He loves, who will one day judge the world and all wrongdoing, who hates sin and who wants us to be “holy”, which means set apart to do what He wants.

The God of the Old and New Testaments is one and the same God. A God who is both completely perfect and incredibly forgiving and kind.

His perfect holiness means that our sin (wrongdoing) cannot be overlooked because that would make Him unjust. His love means that throughout history He has made a way to pay for our sins and make us part of His family.

Out attempts to “earn” right relationship with God ourselves, by our own goodness, are like a small child who repeatedly tries to reach a door handle or climb an obstacle, until eventually he or she bursts into tears and admits defeat.

In fact, righteousness is so far out of our reach, it is more like a child trying to pull down the moon or fly off a tower!

Although we may desire to do the right thing or feel the noble emotion, we all know the frustration of completely lacking the desire or ability to follow through for long on that good intention … or indeed at all!

However, the message of the Gospel (story of Jesus) is that when we give up trying in our own strength and ask for God’s help, the sacrifice of Jesus on the cross pays for all our wrongdoings and we are given His righteousness as a free gift.

That’s why Christianity is good news!