One of the most convincing arguments for Christianity for me is how bizarrely counter-intuitive it is. It is a crazy Alice in Wonderland religion that turns “normal” ideas on their head! 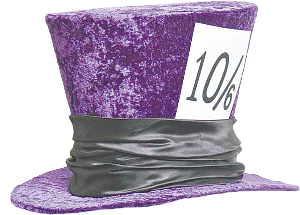 What person would have been able to invent a religion where paradox is paramount? Where the more you give, the more you gain? Where the rich are poor and the poor are rich? Where dying (to yourself) is living and living (to yourself) is dying? Where you have to give everything up to gain the whole world? Where you treat your enemies like your friends, instead of exacting revenge on them? Where you love those who hate you and hate those who love you? (The last in the context of loving Christ Jesus so much that you are willing to disregard or abandon those you love to follow His will.)

Who would invent a religion where you pile up invisible treasures in heaven, by giving away your very tangible treasures on Earth? And in fact are required to HATE money? A religion where you are always putting yourself last behind the needs of others. A religion that requires you to serve others like slaves, even if you are in a position to lord it over them! A religion that promises you nothing now except God’s invisible peace and joy, and expects you to wait to see all your hopes fulfilled in the great by-and-by?

But such an expectation-upsetting religion was indeed started by an expectation-upsetting Messiah. A Saviour who didn’t come to defeat the Romans, but to die a shameful death to defeat sin; Who didn’t hang out with the rich and influential, but with the poor and leprous; Who walked on water and commanded the wind; Who didn’t go to his sick friend’s bedside, because He planned to call him out of his tomb! A King obeyed by demons, yet Who knelt to wash the feet of fishermen; Who said He commanded angels yet paid taxes to Caesar; Who planned to impact the world by training only twelve rather unreliable men over just three years.

And such is the topsy-turvy nature of His enterprise that the more governments tried to stamp Christianity out, the more it grew. As Jesus said in the famous set of paradoxes called the beatitudes: “Blessed are you when they revile and persecute you, and say all kinds of evil against you falsely for My sake. Rejoice and be exceedingly glad, for great is your reward in heaven, for so they persecuted the prophets who were before you.” (Matt 5:11-12)

Christians are constantly exhorted to rejoice in suffering, to count it all joy when they fall into trials and to see death as a step into glory, not a tragic ending of hope. Each of which is completely contrary to all our natural instincts of self-preservation.

How could selfish, pleasure-loving, greedy, naturally vindictive humans come up with such an uncomfortable and radically ‘other’ religion – and why would they?

And then there is the fact that the people who wholeheartedly embrace this martyr-like existence end up being some of the most contented and joyful on the planet, who contribute the most to society and history! As the other stories in the paper testify, this crazy Mad Hatter faith actually works!

Let me learn by paradox

that the way down is the way up,

that to be low is to be high,

that the broken heart is the healed heart,

that the contrite spirit is the rejoicing spirit,

that the repenting soul is the victorious soul,

that to have nothing is to possess all,

that to give is to receive,

that the valley is the place of vision.

– an old Puritan prayer from a book called The Valley of Vision.